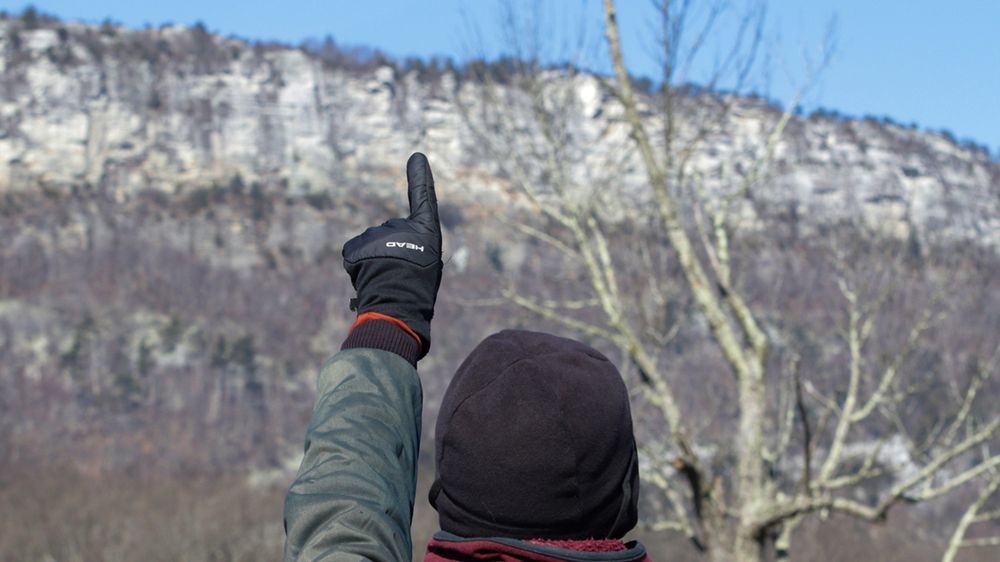 Since 1998, Mohonk Preserve staff and volunteers have been monitoring the annual return of Peregrine falcons to the Shawangunk Ridge. These birds may not be the largest raptors in North America (that distinction belongs to the Bald Eagle), but what they lack in size, they make up for in speed and stamina!

About the same size as a large crow, Peregrines have black backs and facial “sideburns,” long pointed wings, and a narrow tail. Their habitats are diverse, including cliffs, bridges, and even city skyscrapers. They are carnivores, and their meals include birds of many sizes as well as bats and other small mammals.

Peregrines generally return to the ridge in late winter, with mating occurring soon thereafter. Peregrines build shallow, unlined nests on the ledge of a cliff or in an old raven nest. Their eggs are reddish brown with dark brown splotches. Chicks hatch in about a month and usually fledge about six weeks later.

These graceful birds of prey began to return to the Mohonk Preserve in 1998 to nest on our cliffs, and since then, new generations of Peregrines have successfully fledged. In 2005, a Peregrine was banded at the Preserve for the first time in 50 years.

Each year, the Peregrines are monitored by Preserve Conservation Science staff and volunteers as part of the Peregrine Watch program. This program runs from late February through August. Participants monitor and observe Peregrine behavior and breeding activity to identify areas that should be temporarily closed off for the breeding falcons. Once breeding nest sites are identified, participants observe in three locations of the ridge to view the breeding season and record their observations of the nest activity – egg laying, incubation, prey exchanges, presence of chicks, chick feeding, chick fledging, and young in flight. Participants also contribute to public outreach and interpretation of the importance of Peregrine conservation. You can follow the Peregrine Watch here.

For the 2021 season, we have identified nesting pairs at all three heritage sites – Millbrook, Trapps and Bonticou. The Preserve has temporarily closed sections of cliffs surrounding these areas to climbing to help support undisturbed breeding areas for the Peregrines. Birds that nest in natural areas are less tolerant of humans and can attack people they perceive as intruding on their territories. This can result in injury to both people and birds. Also, nesting birds that leave their nests expose their eggs or young to predators, scavengers and inclement weather.

To further protect the nesting Peregrines, the Preserve doesn’t disclose specific information about nest locations or outcomes, We continue to closely monitor these nests to track their progress during the breeding season.

The Preserve has worked collaboratively with the climbing community for decades to help protect the Peregrine falcons and we appreciate their support of our conservation mission and patience as they wait for their favorite climbs to reopen once the Peregrines successfully fledge. We also thank the dozens of Peregrine Watch volunteers, many of whom are climbers, who have generously donated their time and energy to help this magnificent bird.

Trailheads open daily at 7 am for members and 9 am for day-use visitors. The Visitor Center is open from 9-5 daily. Due to Peregrine nesting activity, temporary climbing-route closures are in effect at Bonticou, Millbrook and the Trapps. Click here for details.