March 20, 2021 — Peregrine Falcon breeding season is underway at Mohonk Preserve and we now have confirmed fledgling activity at Millbrook, and possible nesting activity Bonticou. As a result, we are announcing the following temporary climbing-route and bouldering closures:

Due to nesting Peregrine Falcons, the following areas are temporarily closed to rock climbing. The closure is in effect as of March 20, 2021.

Peregrine Falcons are listed by the State of New York as an Endangered Species and we are legally obligated to protect their nesting areas at Mohonk Preserve. The Peregrine breeding season may possibly run through late summer.

The Preserve has worked collaboratively with the climbing community for decades to help protect the Peregrine Falcons and appreciates their support of our conservation mission as they continue to enjoy the hundreds of unrestricted climbing routes available at Mohonk Preserve.

Peregrines are once again active at all three cliffs (Millbrook, Trapps, Bonticou). Snow on the ground through February limited our early observations but nonetheless, volunteers have been actively viewing the cliffs each week to keep track of the birds' progress. While the Preserve peregrines often select different eyries each year, which hinders our ability to install any monitoring cameras, you can keep a close eye on other local peregrines using this link. 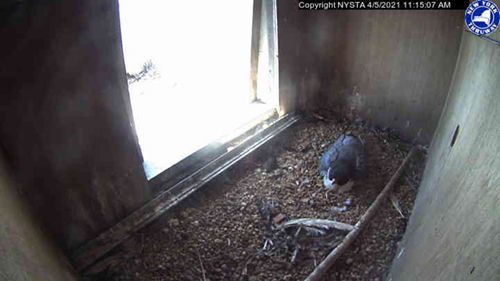 Due to wet and soft ground conditions, equestrian access is temporarily paused through May. Click here for details. Due to Peregrine nesting activity, temporary climbing-route closures are in effect at Bonticou, Millbrook and the Trapps. Click here for details. Trailheads open at 7 am for members and 9 am for visitors. Please note that Preserve lands and trailheads close at sunset. The Visitor Center is open from 9-5 daily. For more information about visiting the Preserve, including trailhead information and COVID-19 protocols, click here.